"From the molecular switching to nanodevices for electronic" group

1. Development of a new methodology based on transition metal K-edge XMCD for the quantification of small structural distortions 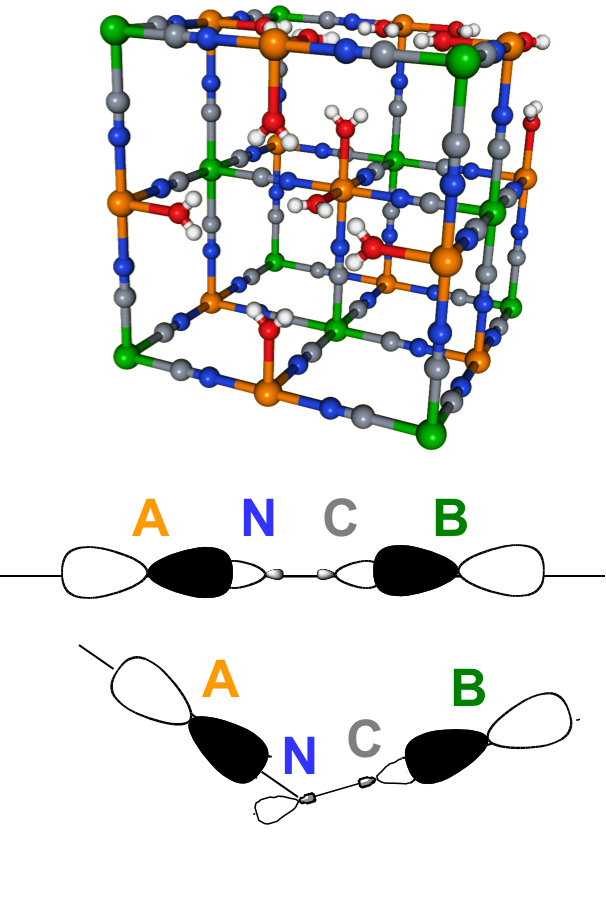 The small structural distortions of the A-NC-B (A,B = transition metals; Figure) linkage seem to control the photomagnetic properties of PBAs. These distortions are however too small for any quantification by classicalt techniques of structural characterization. I am working on a new methodology based on X-ray magnetic circular dichroism (XMCD) at the K-edge of transition metals to quantify these small distortions of the cyanide bridge. This requires the systematic investigation of non-photomagnetic model PBAs

When the methodology is established, it will be applied to the investigation of photomagnetic PBAs in order to control their properties and tranfer their working temperature at room temperature.

Techniques : XAS (Transmission and HERFD) and XMCD at the K-edge of transition metals(Fame-UHD @ ESRF, SAMBA, DIFFABS and ODE @ SOLEIL beamlines)

2. Investigation of the photomagnetism of CoFe Prussian Blue analogues 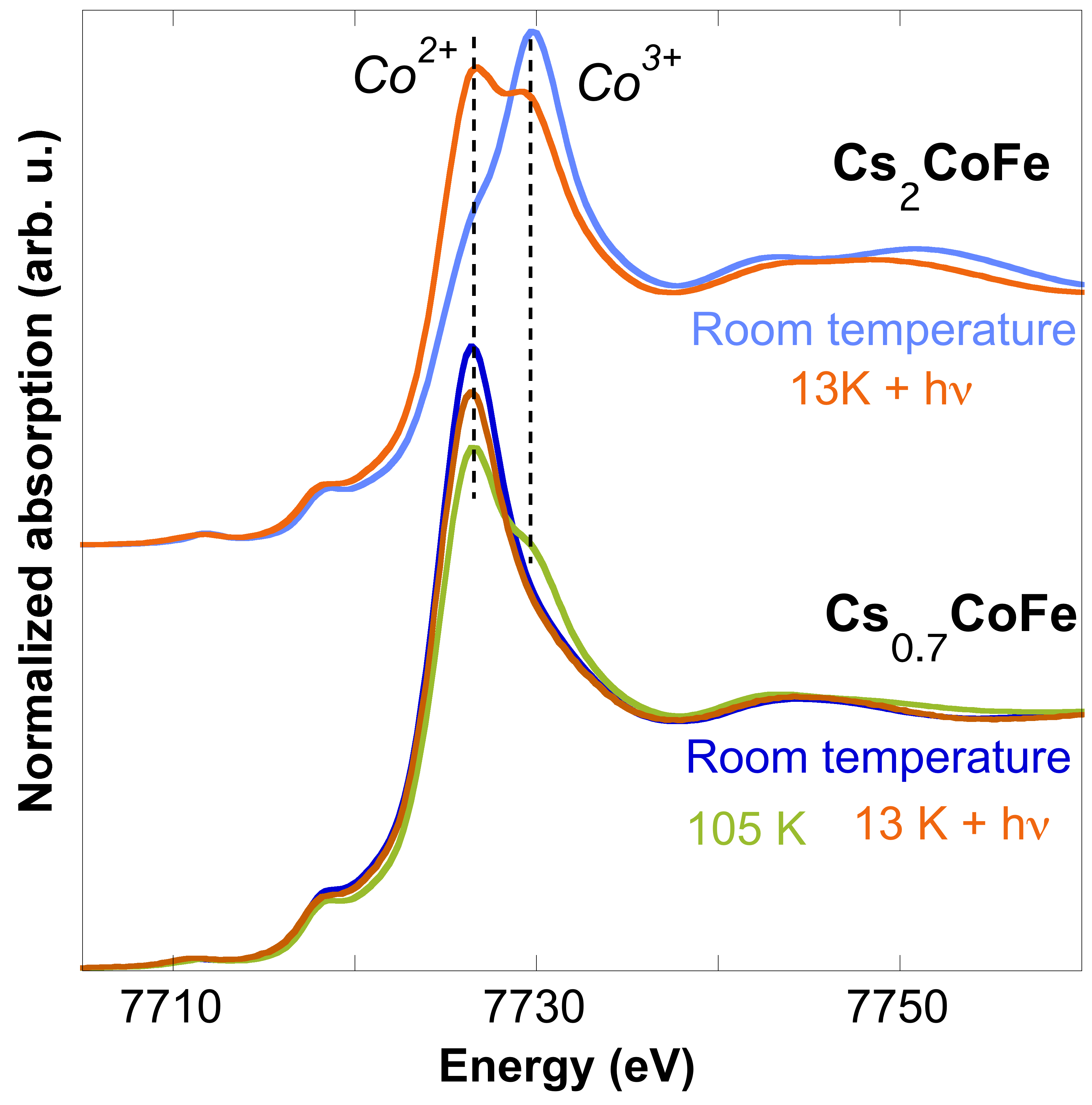 Therefore I lead fundamental investigations of these photomagnetic properties in order to understand  :

Techniques : XAS (Transmission andHERFD) at the K-edge of transition metals and the the edges of alkali cations (BM20 @ ESRF, SAMBA and LUCIA @ SOLEIL beamlines) 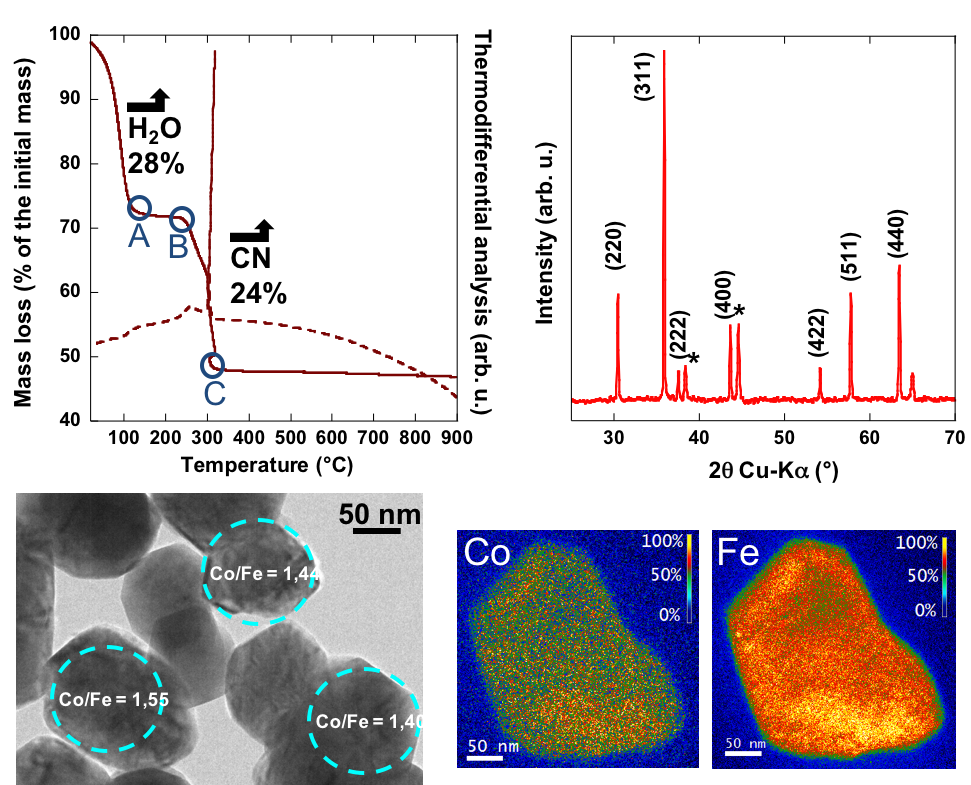 It is well-known that the properties of oxides are controlled by their stoichiometry and synthesis route. A synthesis way reproducible and offering a perfect control of the stoichiometry is so a key-element for the successful development of functional oxides. The calcination in air of PBAs is an appealing route: the PBA stoichiometry is indeed perfectly controlled during by its synthesis, with an homogeneous repartition of the transition metals. The calcination of the CoII4[CoIII(CN)6]2.7 PBA into Co3O4 was first investigated; it lead to the first in situ site-selective XANES experiments, performed to characterize the evolutio of each Co ion type present in the PBA and the Co3O4 spinel. The current studies concentrate on the mixed Co4[Fe(CN)6]2.7 PBA and the formation of the Co1.8Fe1.2O4 spinel (Figure). The different steps of the calcination process were described by TDA/TGA analyses and ex situ powder X-ray diffraction. The synthesis route was then enlarged to the formation of oxides with a controlled stoichiometry between Co1.8Fe1.2O4 and Co3O4 as well as the formation of oxides nanoparticles.

In the framework of this project, my task is to complete the laboratory investigation by in situ XAS measurements of the calcination process in order to finely characterize the oxidation states and local structure of the Fe and Co ions during the calcniation and in the final phase.