We have already synthesized hybrid peptides α/γ shown below. NMR studies together with a restrained simulated annealing (collaboration with Dr. E. Miclet, Université Paris 6) revealed that an extended backbone conformation largely dominates in solution for as short as 4-residues long oligomers. This new fold type is devoid of any hydrogen bond and characterized by a four-fold symmetry (Chem. Commun. 2012, 48, 1982). 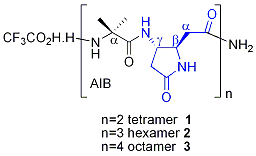 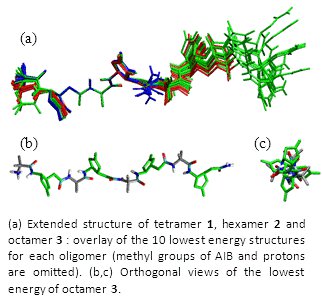 Original αγα tripeptides containing one β,γ-diamino acid have been also extensively studied. These studies revealed the presence of a C9 hydrogen bonded turn, which can be considered as a mimic of the well-known γ-turn. (Org. Biomol. Chem. 2012, 10, 9660). We have recently also shown that a tetrapeptide ααγα with a β,γ-diamino acid of opposite relative configuration adopted a stabilized structure with several hydrogen bonds, one of them being 3-centered and involving the β nitrogen (Amino Acids 2014, 46, 2753).

We are also interested in the biological activites of peptides (Drug Discovery Today 2018, 23, 272) and in particular to potential applications of our β,γ-diamino acids. We have thus synthesized two diastereomeric analogues of Gramicidin S, a potent antibiotic but with strong haemolytic activity (J. Med. Chem. 2019, 62, 7603). We have thus shown, in collaboration with Séverine Zirah (Museum National d'Histoire Naturelle), that the antibiotic activity of our cyclic peptides was reduced compare to the parent compound but they possess no haemolytic activity (Eur. J. Med Chem. 2018, 149, 122-128). 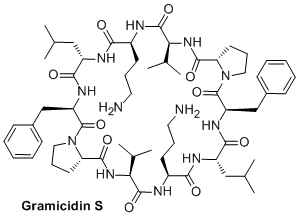 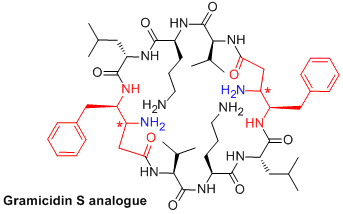 The proposed strategy therefore uses chirality of the natural α-amino acid as the sole source of chirality. The central chirality of the starting α-amino acid is transfered to the dynamic axial chirality tertiary aromatic amides. This strategy was validated on 5 amino acids. Thus, we developed a 3-step synthesis of enantioenriched or enantiopure quaternary α-amino acids (J. Am. Chem. Soc. 2008, 130, 5864 and J. Am. Chem. Soc. 2009, 131, 10711). A collaboration with Dr. P. Archirel (Laboratory of Chemical Physics, Orsay) has been initiated to understand the mechanisms involved (Tetrahedron 2008, 64, 1743). This strategy has been applied to the total synthesis of L-methylDOPA (J. Org. Chem. 2012, 77, 8797). We have successfully adapted this reaction to a flow based system (Eur. J. Org. Chem. 2018, 6754).

Thanks to this strategy, we have developped the first enantioselective oxydative coupling of enolates (Chem. Commun. 2018, 54, 12742).

We have also extended this method to aldol reaction and we were able to control two stereogenic centers. We have thus synthesized in 3 steps enantioenriched and diastereopure β-hydroxyl quaternary α-amino acids (Org. Lett. 2014, 16, 788).

We have extended this methodology to the simplest amino acid, glycine, which do not present any asymmetric carbon. We have thus developed an absolute asymmetric synthesis based on the frozen chirality principle. The idea is the following: crystallization in a chiral conformation of an achiral oxazolidinone lead to the generation of chirality; this axial chirality is retained during the reaction at low temperature and induces a stereoselective attack by the electrophile (Angew. Chem. Int. Ed. 2012, 51, 4981 and Chem. Eur. J. 2017, 23, 5787-5798). 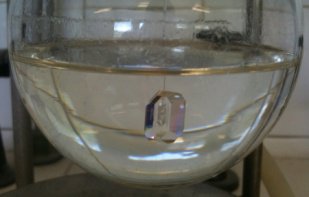 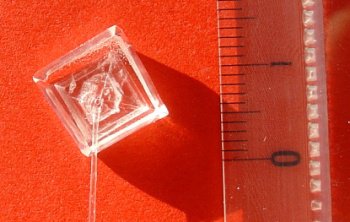