The direct oxidation of an organic molecule by dioxygen is kinetically blocked due to the fundamental spin triplet state of this latter. To overcome this spin restriction, oxygenases (P450, Rieske dioxygenases…) activate O2 thanks to electron input. By contrast, chemists most often use reduced sources of oxygen (peroxides, peracids…) to carry out oxidation reactions. In order to reproduce the enzymes reactivity, there are challenges to take up both from economic and environmental point of views (O2 is free and renewable) than from fundamental ones (control of the electron input in an overall reductive process). We have reported the generation of FeIVO and FeIII(OOH) intermediates by reaction of FeII precursors with O2 in the presence of a chemical reductant and protons. Nonetheless, this procedure is not convenient for the catalytic conversion of a substrate because the oxidizing reaction intermediates react faster with the reductant than with the substrate. To understand the mechanism of O2 activation by FeII complexes in the presence of electrons, 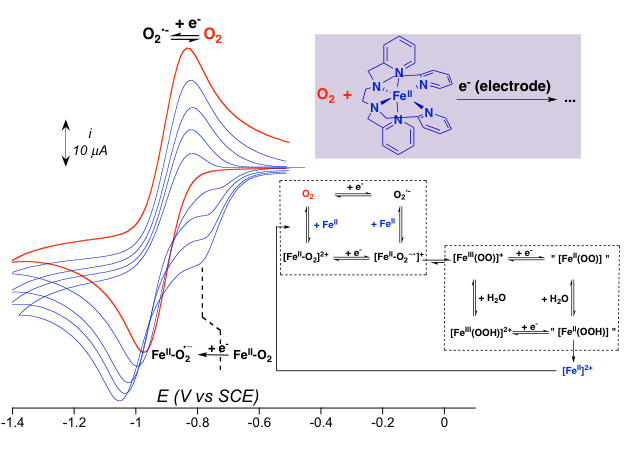 we are developing a cyclic voltametry approach (collaboration with Dr E. Anxolabéhère, Univ. Paris Diderot). We have observed that the FeII-O2 adduct is more easily reduced than O2, indicating that the FeII complex performs the reductive activation of O2. Using the electrochemical signatures of FeIVO, FeIII(OOH) and FeIII(OO) isolated at low temperature as benchmarking data allowed to simulate the voltamograms of samples with various  O2 / FeII composition and finally to determine the mechanism of O2 activation by FeII complexes. This type of study will help us in developing electro-assisted catalytic oxidation reactions. 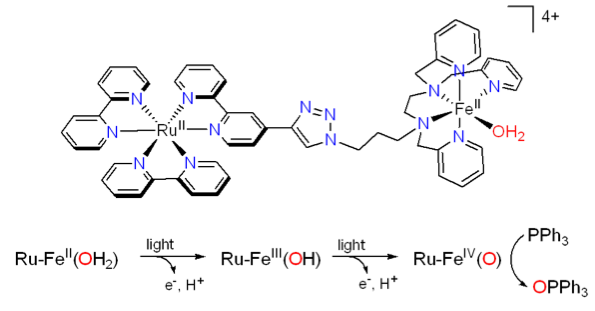 In the framework of artificial photosynthesis, we have designed a system combining a [RuII(bpy)3]2+ chromophore to an FeII catalyst via a covalent link with the objective to photogenerate a FeIVO intermediate following 2 e- / 2 H+ abstraction from the  FeII(OH2) precursor and subsequent oxidation of a substrate. Upon irradiation, two successive electron transfers leading to FeIVO habe been evidenced together with the oxidation of a substrate. This type of system could provide electrons required for the reductive activation of O2 or for a chemical reduction. This work is developed in the frame of the'Multiplet grant project.